The casting in different places is relatively uniform. The casting began in 1900 (the 26th year of the reign of Emperor Guangxu of the Qing Dynasty) and ended in 1911 (the third year of the reign of emperor Xuantong). Because of its elegant layout, excellent carving and rare quantity, the ten household coins of Guangxu year in Qing Dynasty are known as one of the ten famous coins in modern China.

In view of the unrestrained coinage of copper coins in various provinces, the Qing government began to rectify and unify the currency system, trying to nationalize the coinage right and strengthen the control. In October 1905 (the 31st year of the reign of Emperor Guangxu), the general mint of the Ministry of household set up by the Qing government in Tianjin began to cast the new type of copper coins of the Qing Dynasty, and promulgated ten articles of the articles of Association for rectifying the circular law, which stipulated that "the quality of the copper yuan should be 97% red copper, 3% white copper and 1% tin"; "When the weight is fixed, 20 coins should be of four coins, 10 coins should be of two coins, 5 coins should be of one coin, and the two coins should be of four coins." "the bronze coins of the Qing Dynasty should be made in a unified way, and the ancestral molds issued by the Ministry of household are the same as those made by the General Factory, but the name of the province should be added on the front for reference. Each time the coin is cast, it must be submitted to the Ministry of Finance for testing, and the Ministry of Finance shall send an important person to inspect it at any time. "" the copper coin cast in each province should be priced according to the market situation, and received as soon as it is issued, and received by letter. "" the copper coin cast in each province should not be sold in large quantities in daily life. If it is needed in each province, it can be prepared for collection at the general factory. ".

Facing the increasing disaster of copper yuan flooding, the Qing government was determined to reform the currency system thoroughly, fundamentally solve the problems exposed in the copper yuan casting, abolish the old copper yuan and rebuild the new copper yuan. On April 16, 1910 (Xuantong 2), the Qing government promulgated the code of currency system, which implemented the silver standard system, namely, taking silver as the main currency, copper as the auxiliary currency, and a new type of auxiliary currency system was established clearly. The new copper yuan is divided into four types: two, one, five and one. However, the value of the new copper dollar deviates from the price comparison of money making, only in the form of casting, and is not in circulation. Therefore, in 1911 (the third year of Xuantong), a new set of copper yuan was launched, still known as "Da Qing copper coin", which included five types of 20, ten, five and two and one article. More than five articles were cast with exchange value of money and silver to supplement the deficiency of the first set of new copper yuan. At the same time, it is also stipulated that the new and old copper yuan shall be used together temporarily, and the old copper yuan shall be gradually recovered within three years and shall be stopped at the end of the period. However, before the reform of the currency system was fully implemented (only ten and one copper yuan entered the circulation field), the 1911 Revolution broke out and the Qing Dynasty was destroyed. 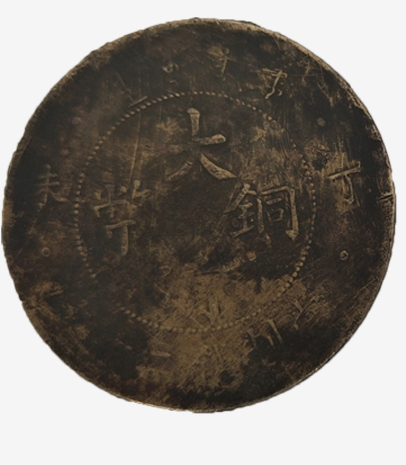